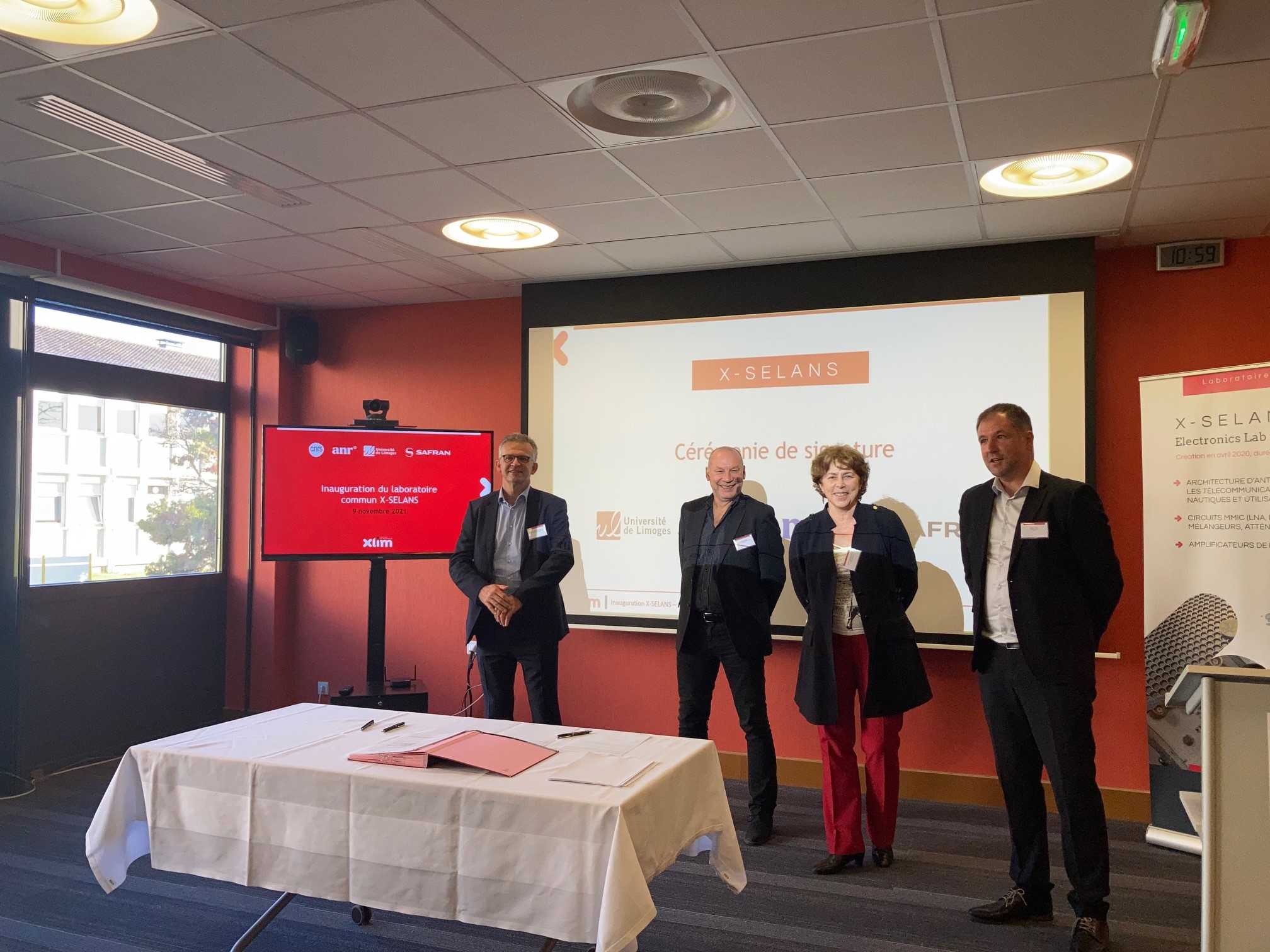 Inaugurated on November 9, 2021, the joint laboratory X-SELANS (Xlim-Safran Electronics Lab for ANtennaS) will enable teams from the University of Limoges, the French National Center for Scientific Research (CNRS) and Safran, with support from the French National Research Agency (ANR), to further cement their ties and their ability to carry out research and development on antennas and active sources, as well as the integration of microwave functions. The inauguration ceremony was attended by Jean-Marie Bétermier, Executive Vice President for Space at Safran Electronics & Defense and CEO of Safran Data Systems, Isabelle Klock-Fontanille, President of the University of Limoges, Laurent Nicolas, Scientific Deputy Director of the CNRS Engineering and Systems Sciences (INSIS) Division, and Pierre de Souffron, coordinator of the “LabCom” (joint laboratories) program at the ANR.

Work at X-SELANS will be funded by the French National Research Agency (ANR) and the three other partners, and will involve a dozen researchers, engineers, doctoral candidates and interns. The creation of this joint lab will ensure the continuation of a partnership between Safran and XLIM, the joint research unit between the CNRS and the University of Limoges, initiated by doctoral theses under CIFRE, a government program for “training through research”, in 2014.

Through this initiative, Safran Data Systems plans to take a proactive role in the development of new active antenna technologies and receiving stations to consolidate, over the medium term, its world leadership as a producer of ground stations for space and flight testing.

The research carried out at X-SELANS will address a number of challenges, including the integration of microwave components and amplifiers, the improvement of radiating component networks and the measurement and control of high-gain antennas.

“Working closely with a partner in academia such as XLIM will enable us to significantly speed up Safran Data Systems’ innovation and competitiveness in the ground station market,” said Jean-Marie Bétermier, CEO of Safran Data Systems. “Developing proven skills in the miniaturization and integration of microwave electronics in antennas, as well as digital technology, will be a critical advantage for the manufacturers involved.”

Isabelle Klock-Fontanille, President of the University of Limoges, added. “We’re delighted to contribute our scientific expertise to these major research projects, thus enhancing the industrial and technological expertise of French industry.”

“The XLIM lab is already internationally known for its work on microwave circuits and systems,” said Antoine Petit, Chairman and CEO of the CNRS. “Its industry-focused innovation capabilities are now expressed in the X-SELANS lab, a structured and integrated partnership between Safran Data Systems and academia. Today’s signature reflects the trend at the CNRS to strengthen relations with private companies, as shown by the nearly 200 joint laboratories now in operation.”

Pierre de Souffron, scientific project advisor and coordinator of the LabCom program at the National Research Agency, said, “Creating a joint lab is above all a human story. It encourages and facilitates the hiring of research engineers, doctoral candidates and post-docs. Over and above its scientific achievements, a joint lab offers the possibility of evaluating the structures involved at the end of a project to determine whether these structures should be made more permanent and how they can beused by the stakeholders. This capacity clearly reflects the benefits of the public-private partnership model.”

Check out the press release