A novel technique to trap molecules and nano-structure gas materials 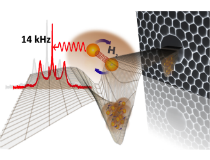 Diagram showing a gas of hydrogen molecules in a micro-structured hollow fiber and trapped in nanometer-wide potential wells and emitting light high power radiation with an ultra-narrow spectral width.

In an article published in Nature Communications *, the GPPMM group (XLIM Institute, CNRS and the University of Limoges, France) reported on an original and powerful technique of trapping molecules. This technique consists in exciting gas molecules, here hydrogen confined in a hollow-core photonic bandgap fiber, with a continuous-wave and powerful laser and rotating them at a frequency of ~ 17 THz. These rotating molecules emit a second radiation (the Raman laser) in opposite directions to form an optical lattice along the fiber core. In a rare interplay between the optical lattice, the rotation of molecules and the excitation laser, a potential lattice with nanometer-wide wells is formed and whose depth can trap molecules with speeds up to 1800 m / s. The molecules are thus highly localized within a space that is substantially narrower than the wavelength of the laser involved (we refer to a Lamb-Dicke regime), and form an original structure fully made with a gas-phase material, and where the laser-emitting molecules are only those trapped in the nano-wide potential wells. By generating this new "gas" structure, Fetah Benabid and his team have demonstrated the generation of a powerful laser and whose line width is well below the recoil limit-i.e. below the spectral width caused by the molecule motion imparted to it during an emission of a photon-, and the observation of a large number of quantum phenomena are usually masked by the agitation of the molecules and the Doppler effect. Among which we count the existence along with the highly localized molecules of an overall gas motion over the whole fibre length, and that is observable in a dramatic fashion with naked eyes (see video).

These results open the way for a quantum control molecules whose level is comparable to that achieved with cold atoms.